ZERO Code: The Future Has Arrived 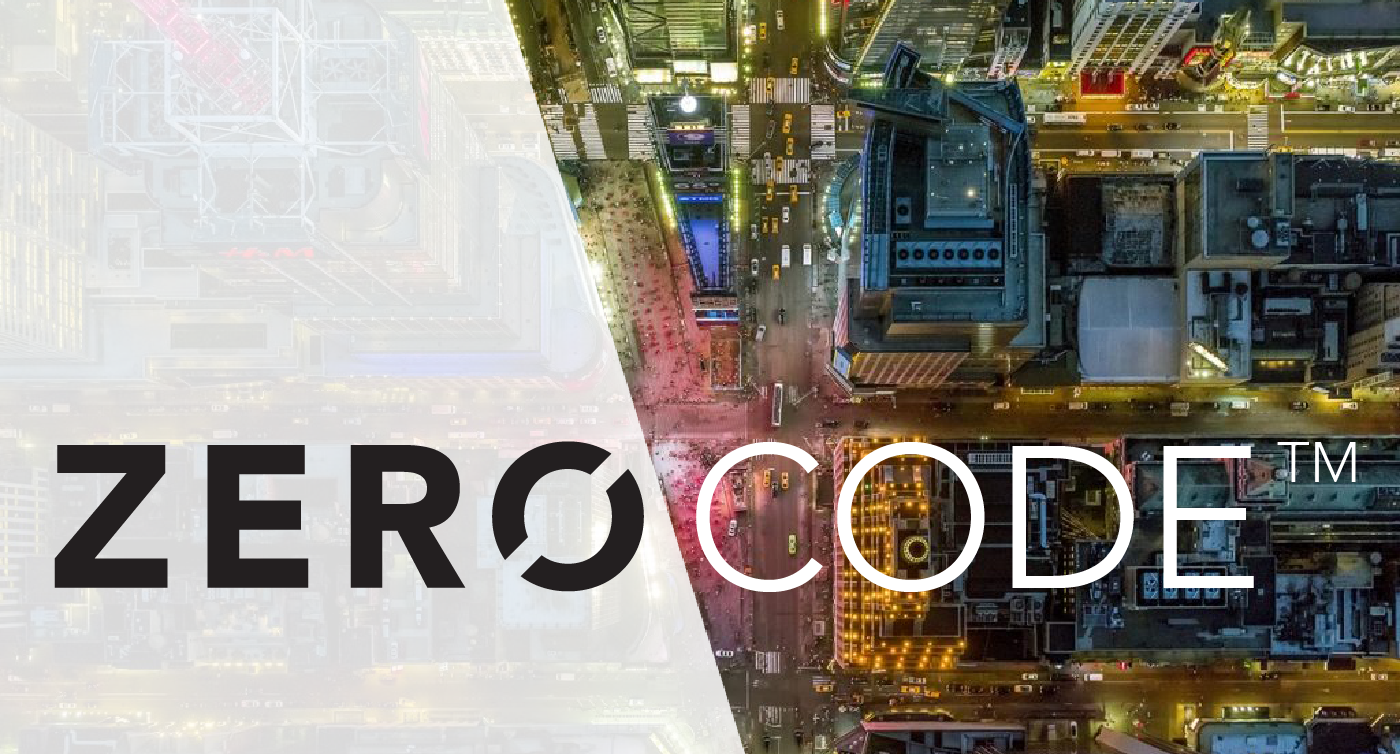 Reflect for a minute on the following United Nations projection:

In order to achieve the target set by the Paris Agreement ­– to limit the rise in global average temperature to below the 2 degree C threshold – all new construction must be designed to high energy efficiency standards and use no CO2-emitting fossil fuel energy to operate; by 2050 the entire built environment must be carbon neutral.

Why is the ZERO Code so important today? 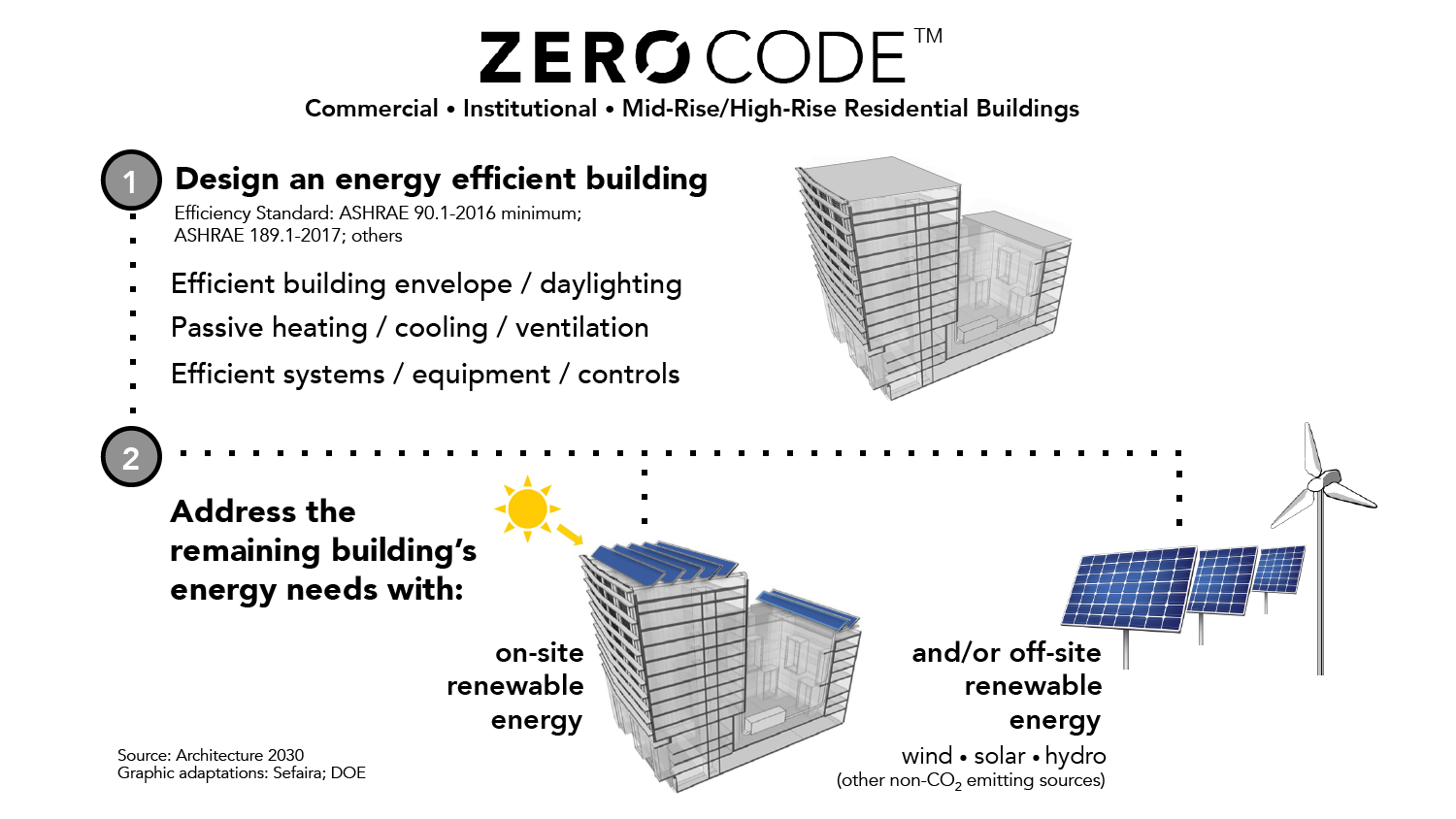 The ZERO Code, which can be adopted immediately, results in ZNC buildings. It accomplishes this by incorporating current and cost-effective energy efficiency standards with on-site and/or off-site renewable energy provisions.

Building Energy Efficiency
The ZERO Code includes prescriptive and performance paths for building energy efficiency compliance (based on current standards that are widely used by municipalities and building professionals worldwide) and is supported by compliance tools and simulation software.

Renewable Energy
The ZERO Code offers code adaptable language and a flexible approach for incorporating renewable energy, both through on-site generation and/or off-site procurement. By establishing a flexible approach, the ZERO Code is applicable to all new commercial and institutional buildings, and mid- to high-rise housing, including buildings with limited on-site renewable energy generating capacity (e.g. buildings in dense urban environments).

ZERO Code – Software
The ZERO Code is supported by software that eases the implementation process and reduces errors when applying the prescriptive compliance path. An Application Program Interface (API) for the software has been developed, enabling the software to be implemented as a website or an application for smart phones and tablets. Ultimately this approach will save years and valuable resources that would otherwise be spent on developing new compliance tools and mechanisms. 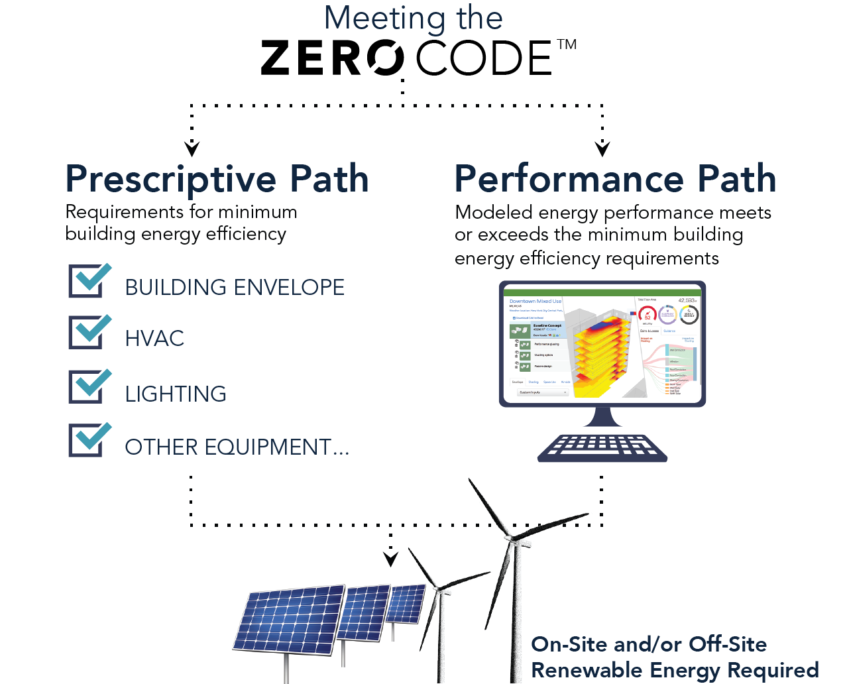 ZERO Code – Adoption
The ZERO Code standard can be incentivized or required by adopting jurisdictions. To access the ZERO Code website, including API documentation and the simulation interface, and to download the ZERO Code and Technical Support Document for the off-site procurement of renewable energy, visit www.zero-code.org

The ZERO Code is essential in advancing CO2 emissions reductions worldwide. Time is of the essence! 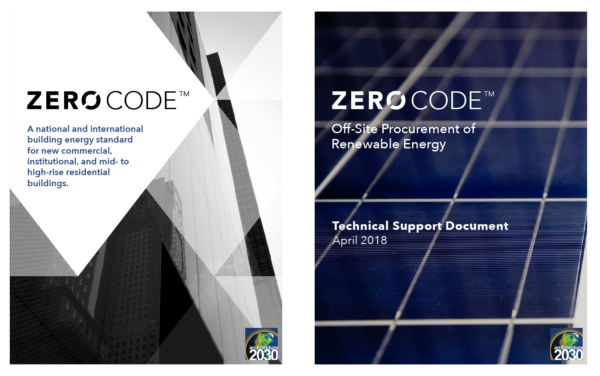 More to Come
The ZERO Code standard, a model building energy ordinance for adoption by local jurisdictions in California, is supported by the California Governor’s Office and California Energy Commission, is in development and will be presented at the Climate Action Summit being held in San Francisco, September 12 – 14, 2018. The creation of a ZERO Code industry standard is also being discussed with colleagues and professional organizations in China.
Next Up
And, if we’re serious about addressing climate change and meeting the Paris Agreement targets, we must also decarbonize building materials and construction processes, and begin renovating the existing global building stock to ZNC standards, NOW! New advances, tools and strategies to accomplish this will be presented in upcoming E-News Bulletins.
Stay tuned! Get the latest news and developments from Architecture 2030 – sign up here.

Shaping the next generation of Architects