When nearly 200 nations signed the Paris Agreement in December 2015 – the first formal international accord to take action on climate change – it sent a strong signal to global markets that the world economy must shift away from fossil fuel dependency.

In response to this historic agreement, a groundswell of local and sub-national governments have established ambitious goals to reduce the pollution that is linked to climate change. Since 2016 alone, mayors from over 10,000 cities worldwide have committed to climate and energy goals that meet the Paris Agreement. To meet these goals, many policymakers are now investigating the implementation of zero carbon policies that will eliminate or dramatically reduce emissions from all new buildings immediately, and from the existing building stock by 2040.

Architecture 2030 partners with policymakers from local governments and stakeholders across the U.S. and international markets to analyze and accelerate the adoption of these critical zero carbon policies. These initiatives include the following:

The CARE (Carbon Avoided: Retrofit Estimator) Tool is used for calculating the embodied, operating, and avoided carbon impacts and benefits of reusing and upgrading existing buildings, compared to replacing them with new construction.

> Learn more about the CARE Tool

A framework of integrated policies for national and sub-national governments (state, provincial and municipal) to phase out CO2 emissions in the built environment by 2040. 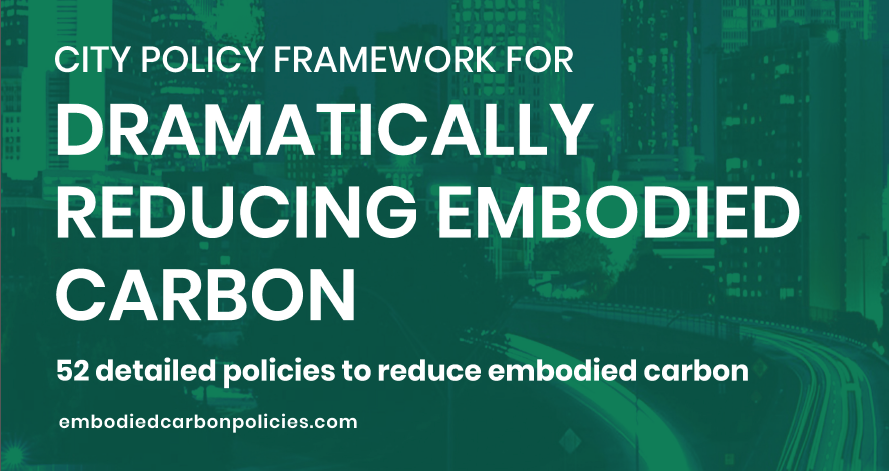 The City Policy Framework for Dramatically Reducing Embodied Carbon provides guidance for cities considering policies that can deliver the highest impact within their geopolitical contexts and regulatory systems. Over 50 existing policies from leading cities have been evaluated, categorized, and scored according to their potential, cost efficiency, ease of implementation, and enforceability.

> Learn more about the Zero Tool