What this means is, we have no need to add more electricity generating capacity – additional power plants – to service the building sector today, or in the near future.

Although this news is cause for celebration, it appears to be deeply troubling to the gas and fossil fuel industry. So troubling, in fact, that somewhere in a parallel universe the American Gas Association is again pushing for repeal of Section 433 (which calls for new and renovated carbon neutral federal buildings by 2030), by creating an illusory need for more natural gas.

The truth is, if we incorporate the “best available demand technology” in our building designs (roughly equivalent to meeting the 2030 Challenge targets), we can reduce the Building Sector’s energy consumption by 2030 even further. Under this scenario, the EIA estimates that we would reduce the need for building operations energy by an additional 8.1 QBtu and reduce U.S. electricity capacity by 177,700 megawatts between now and 2030, roughly the equivalent of 355 large coal or gas fired 500MW plants. This would reduce CO2 emissions from building operations by a staggering 29.8% below 2005 levels by 2030. 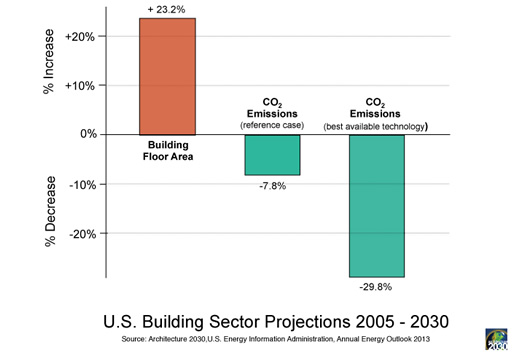 It is clear that the Building Sector is tracking ahead of the 2030 Challenge reduction targets with unstoppable momentum. We’re vigorously addressing today’s critical issues of energy security and environmental stewardship. We’re doing what we set out to do six years ago.

Here in our universe, we’re breaking out the champagne!