This has been a remarkable month. Architecture 2030 has received an enthusiastic reception by the architecture and building community. We have received hundreds of congratulatory emails, extensive press coverage and thousands of visits to our website. As we begin a new
year we are encouraged by a recognition among design professionals of their responsibility for both the built and natural environment. Recently, the presidents of 16 of the world’s leading architecture institutions signed the “Las Vegas Declaration” calling on the profession to “do all it can to influence a major reduction in the level of carbon emissions that result from the creation and life-cycle of the built environment.” In December, 2005 the American Institute of
Architects (AIA) adopted the action items called for in the “2030 Challenge” (see below) and is now working to implement them. And just last month, New Mexico became the first state to require that all state funded new buildings and renovations meet a building energy performance  standard of 50% less than the national average for that building type.

However, not all the news is good. NASA scientist Dr. James Hansen continues to warn us that climate change is not only happening, but happening faster than anticipated. It appears that we have a small window of opportunity to stabilize and then reduce greenhouse gas
(GHG) emissions globally.

Now more than ever we must join together in the effort to control emissions from the building sector. To accomplish this, today we are issuing the “2030 Challenge”. You can join by showing your support and urging local, national, and international architecture, planning, and  building design organizations to adopt the challenge and lobby governments at all levels to pass orders and legislation incorporating the measures called for below.

Working together we can design a better future. 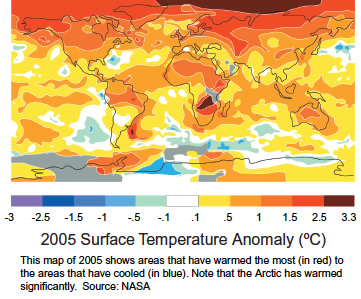 Recently, it was reported in the New York Times that (it appears) procedures are being put in place at NASA to prevent “the public from fully grasping recent findings regarding climate change”. This comes in response to a lecture recently delivered at the annual meeting of the American Geophysical Union in San Francisco by Dr. James Hansen, NASA’s director of the Goddard Institute for Space Studies. In his lecture titled “Is There Time to Avoid ‘Dangerous Anthropogenic Interference’ With Global Climate?” Dr. Hansen presented two startling conclusions regarding recent research conducted at NASA.

First he presented “evidence indicating that the Earth’s climate is nearing, but has not passed, a tipping point”. He estimates that if greenhouse gas (GHG) emissions are not brought under control in the next ten years the Earth would experience “warming of more than 1ºC that will make the Earth warmer than it has been in a million years”. In a “business-as-usual” scenario, with emissions continuing to increase at about 2% per year, Dr. Hansen stated that the Earth would experience “warming of 2 or 3°C this century and imply changes that constitute practically a different planet”.

Second, and even more alarming, he stressed that changes to the planet included not only loss of the Arctic as we know it, but “losses on a much vaster scale due to worldwide rising seas”. As the “Greenland and West Antarctic ice is softened and lubricated by melt-water and as buttressing ice shelves disappear due to a warming ocean, the balance will tip toward ice loss, thus bringing multiple positive feedbacks into play and causing rapid ice sheet disintegration”. He concluded that the Earth’s history suggests that with a warming of 2-3°C the new equilibrium sea level will be “of the order of 25 meters (80 feet)” higher than today. He pointed out that real world data suggest substantial ice sheet and sea level change in centuries, not millennia”, possibly by as much as several meters per century.

Other scientists have confirmed Dr. Hansen’s conclusions. Dr. Jonathan Overpeck, director of the Environmental Studies Laboratory at the University of Arizona points out that “the earth will be warm enough in less than 150 years (assuming no reduction in GHG emissions) to melt the Greenland Ice Cap (six meter rise in sea level). This change could also lead to four to six meters of sea level rise at a rate of up to two to five centimeters per year.” The good news from all this is that there is time to act now. 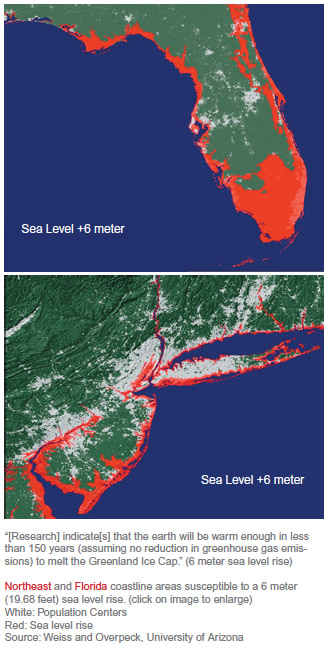 Want to join the discussion?
Feel free to contribute!

A Historic Moment
Scroll to top