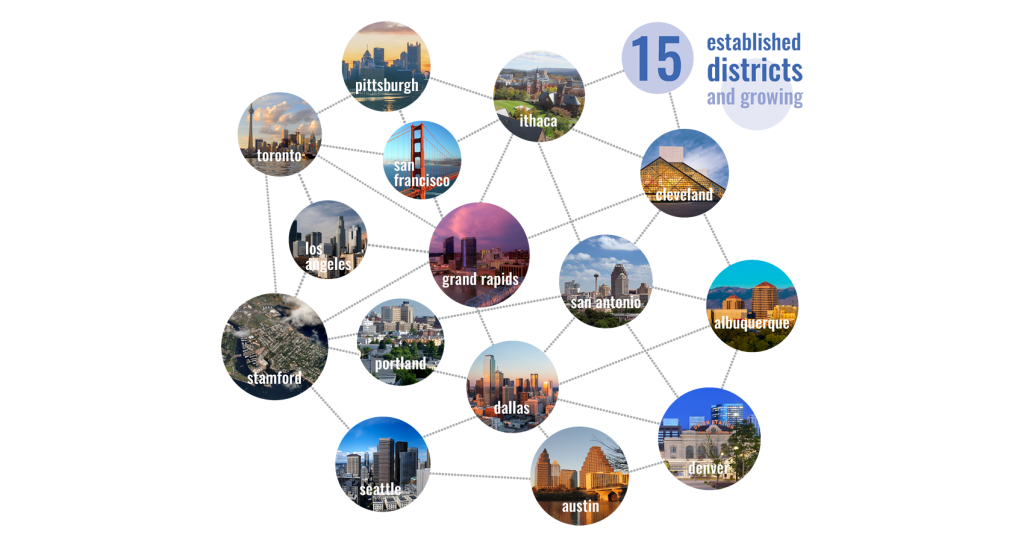 After five years of support and oversight from Architecture 2030, the fifteen 2030 Districts across North America establish their own non-profit.

The private-sector led 2030 Districts have been established in cities across North America as grassroots efforts to provide a business model for urban sustainability through collaboration, leveraged financing, and shared resources. The 2030 Districts work towards a common goal of meeting the energy, water, and transportation emissions reduction targets for existing buildings and new construction called for by Architecture 2030 in its 2030 Challenge for Planning.

Now, after five years of growth with oversight from Architecture 2030, the fifteen 2030 Districts have established their own non-profit, the 2030 Districts Network, to support their efforts.

“We understood the power of creating a District model to address resource conservation in cities. It has been gratifying to see the market signal that this model is the right way to create change in the industry.”
– Edward Mazria, Founder and CEO of Architecture 2030 and member of the new 2030 Districts Network Board

The 2030 Districts Network includes more than 290 million square feet of member-owned real estate, over 1,000 buildings, and over 600 different member organizations.

While the Districts are managed by their local boards, the 2030 Districts Network was established to support peer exchange across Districts, store and share data, use the aggregate purchasing power of the District membership to secure reduced costs, create national partnership relationships, and influence national policy on transportation infrastructure and building water and energy efficiency.

But with the 2030 Districts’ successful growth – in addition to the fifteen Established Districts, there are five more cities that have reached the Emerging District stage of development – the logical step was for the Network to become its own non-profit organization.

As part of this move, the 2030 Districts have selected the following thirteen members to its initial Board of Governors:

Under this new leadership, the Network will look to build upon the success and expand its reach to more cities in North America and beyond.

The majority of 2030 Districts are located in downtown commercial cores and city centers, which typically have the highest and most concentrated energy and environmental impact. There, the reduction of energy and water consumption, transportation emissions, and improved indoor air quality provides the additional benefit of increased competitiveness in the business environment and owner’s returns on investment. Several of the Districts that are vulnerable to environmental threats such as flooding also focus on community and economic resilience.

The Districts have an impact on raising awareness of climate change and mobilizing community action.  Several Districts have published annual reports documenting their successes and have been able to create meaningful and quantifiable strides to meeting their goals.

“Architecture 2030 is delighted to be handing over supervision of the 2030 Districts to their own free-standing organization. The Districts have been a great success, and we look forward to their continued growth and development, supported by the 2030 Districts Network.”
– Edward Mazria

U.S. Building Sector Emissions Down – The Driving Force: You!